Whatever’s in my supermarket produce aisle inspires my next dish—this time it was large, perfectly round portobello mushroom caps. I know some people hate mushrooms, maybe a texture thing, but I grew up eating them. My mom often had a bowl of dried mushrooms soaking in its brown liquid that she’d toss into a vegetable or meat stir-fry. Juicy and chewy with dark rich flavors…yum.

This was my first time making stuffed mushrooms so I took the safe route and cooked the filling and prepared the mushrooms separately, then added one to the other.

The filling was just a common grain bean mixture I make all the time for lunches. This one had quinoa, kidney beans, sautéed butternut squash and baby spinach. The topping was a “nut-parm” mix of cashews/almonds/walnuts, nutritional yeast and salt ground up in a food processor.

I rinsed the mushrooms under gentle running water (it’s a myth that they absorb water and get soggy 😀) to help remove dirt and human fingerprints that I’m sure were groping the bin of these loose mushrooms. Gently carve out the stems with a paring knife, but don’t throw out! You can dice them and add to the grain mixture—they taste just fine! I left in the gills but feel free to remove if you prefer, or to create a deeper well for the filling. Brush the caps with olive oil and place on a baking sheet with gills side down. Bake at 400 F for about 10-15 minutes until they darken more. A lot of liquid seeps out; you can discard or mix into the grain mixture for stronger mushroom flavor.

Scoop the grain mixture into the caps and top with the nut-parm and herbs as desired. It’s a light dish and even two caps were not that filling. Next time I may use a heartier grain like farro and add cooked sweet potato, whole walnuts, and more beans! 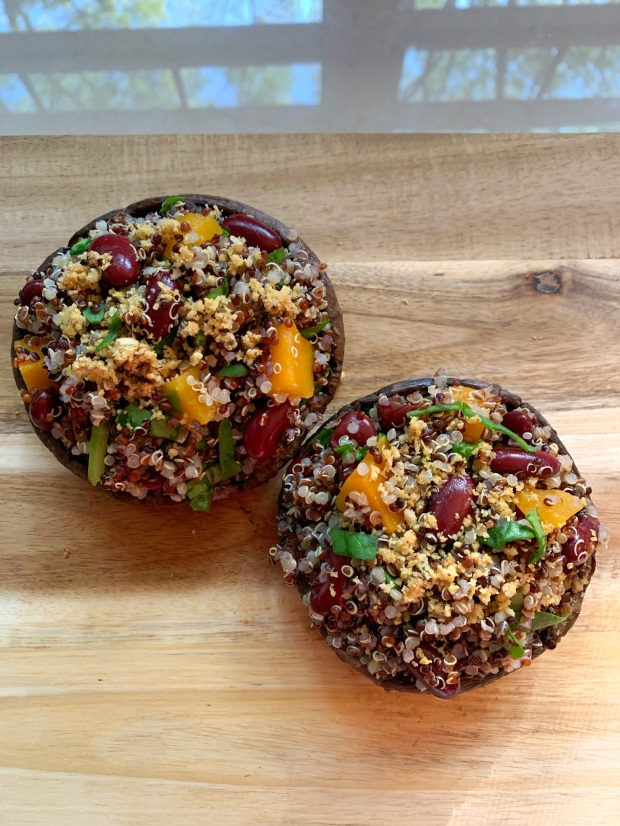 Walking into a new chapter ✨ Mixed feelings leaving an awesome job for the past 13 yrs, thank you @bwfaulknerhospital 😔 but I guess change inevitably comes for you ⏩➡️ @brighamandwomens
High-rise bowl food 🍲
Envying his simple happy life 🐶
Oh Potato I will always love you 🥔💘 no matter what they say
Listening is a powerful gift: people start to heal the moment they feel heard
It’s amazing how getting away for just a few days and seeing new things is more than enough 🧡🤍